April 27, 2016
So here goes, as many of my work colleagues know I have a guilty secret. It's one I am slightly ashamed to admit but there. I read the Daily Mail online. I love it. The pointless articles on 5 stone cats, the bad spelling and grammar all at the same time as feeding my daily stalker obsession of the Kardashians. There it is I have said it.
In particular I have a good on perusal of my secret shame at work whilst eating my sandwiches Greg made me the night before. I came across something that made me and another mum colleague stop and have a good old chin wag about. This then in turn led to me sending it to my fellow Mum Bestie. A sign of something blog worthy me thinks.

It was about a lady who reported on Mumsnet of all bloody places that she didn't like her friends child and should she stop hanging around with her friend? Or doesn't want to meet her when the kids are present. It then caused an uproar and divided the readers of Mumsnet and Daily Mail, that one it is not really politically correct to say you don't like your friends kid, and the writer is a callous old cow, or that she was congratulated by the child hating minority of readers.
The original post advised and that the Daily Mail successfully regurgitated her friend had two kids under three and one of them was abit of a threenager. She was demanding, she threw tantrums, she wanted everything now, she wanted to be carried everywhere, the other younger child gets slightly less attention due to the behaviour of the older one. So far as any mum would realise she has described the normal everyday behaviour of a toddler and indeed one with a younger sibling.
This wonderful friend then goes on ask; 'AIBU (am I being unreasonable) to think friend should possibly be encouraging child NOT to behave like this and avoid friend because of it. The screaming is hard on the ears.' 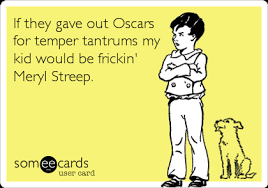 Do you think your friend wants to deal with a bratty toddler in public?
Don't you think she is slightly more concerned about her two kids and what everyone else thinks of her never mind her so called friend about it being hard on her ears?
Did you ever think to ask if she needs a hand?
If you could take the younger one for a few hours and let her have some alone time with the toddler, as she obviously craves attention?
Have you ever offered to take your friend out to give her a break and some adult conversation?
As a mother you would probably be surprised to hear I am not offended with this lady saying she doesn't like a particular child. I can understand some kids are little shits. The ones standing at the top of the climbing frame yelling BELLEND in some poor unsuspecting girl's face. I sometimes don't really like Elijah when he is in full blown Damien mode. If someone said they didn't like my child, especially a friend I may take it slightly personally but hay hoe I am not asking them to adopt and raise him so frig them. What I think I would be more concerned about is what a bloody shit friend this lady has been. I love that she didn't know who to turn to in her hour of bloody need so she decided to go to Mumsnet. I am fine with people choosing not to have kids because they don't like children. I find that's more of a sweeping generalisation, and its their choice. I am also okay with the fact that this lady doesn't really like her friend's daughter as she is a bit of a mini Madonna.
However, normally most kids go through the 'terrible two's', (three's four's, five's but who's counting) but they grow up. She was a child once and who knows she may have been exactly the same. But to say that the mum should impose more discipline? Has she ever taken a toddler into Morrisons after they have refused a nap all day and only want to run out of the door shoplifting bananas. NO. Has she ever tried to fold a kid into his pram like a deckchair as his has gone rigid, and doesn't want to stop running up people's gardens. NO. Has she ever had to deal with a kid who crazes and crazes for his Peppa Pig raisins but then lobs them all on the floor. Hell NO. There is not enough reward stickers, 'oh you wait until your dad gets home', 'No kinder eggs', 'No you cannot choose a magazine as you have been naughty', that will stop a toddler if they are on one.
When are they on one? All the effing time. Especially when you choose to go out and take them with you for a nice civilised coffee date with your childless friends. Never mind the fact this woman an unsung hero to even get out the bloody house if you ask me as she has a younger baby as well. For all those lovely people who felt like they could comment on her parenting ability and shortcomings when you know nothing about the family, the little girl or anything other than the bitchy ramblings of her 'friend' I think you are as bad as she is.
We should not be judging other parents and telling them how to discipline their 'behaviour'. Why? Because they are not our children. My child is my responsibility. He is mine to discipline and raise how I see fit. If I want you to parent my child I will ask you if he can move in.

I think it is also our responsibility to share parenting tips and hints for those who ask for it. However, a parent should not be judged on the behaviour of a small child obviously displaying the normal traits of being a toddler. They are their own person, and it is no way in any reflection that she is a bad mother. I think she is probably a bloody good one trying to juggle two kids under four with who knows what else going on. If all of her friends are as supporting as this one no wonder the poor bugger is having a bad day.
Even before  I had children if I went out and my friend was obviously have a time of it (and this sound like it is not the first time) I would try and arrange a night out for her, or take a bottle of wine round and watch BGT when the kids have gone to bed with a takeaway. Do you know what I probably wouldn't do? Publically shame her on the biggest parenting website in the world. As everyone is now judging her ability as a mother. Through this article do you know that other than talking about herself she never once mentioned if she was worried about her friend or what she can do to help her.
So to the mother of the children my love we've all been there, keep going. Like any mum I see dealing with a stinker of a meltdown; I SALUTE YOU. As for your 'friend', she may not like your child love, but I would sack her off she is no friend of yours and I think after this your not really going to like her. Heaven help her if she has her own kids.